Just put together some new wallpapers for the iPhone 5, which can also be found in the image gallery on this blog.  Both images are sized to fit the screen of an iPhone 5 without the need for cropping.  The wallpapers are made under the Creative Commons License.  All images used and composited to create these wallpapers are the property of the original artists, and no copyright infringement is intended.  Please feel free to share this post, and/or the images presented.

So I entered a T-shirt design contest.  The winners are chosen by the number of votes their designs receive.  The winner(s) receive a cash prize, and likely their design on a t-shirt that people can actually buy and wear!  In public and shit!  It’s rather amazing!  And oh yeah…it’s a Star Trek design contest.

Here’s the thing; I don’t have many friends, and could use some help with the whole ‘getting votes’ thing.  I am including links to all five of my designs, and would love some votes to help me out. 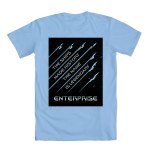 Some written blog posts are on the way soon, for all 3 of you readers that are waiting.  But in the meantime, I worked up some new wallpapers for my iPhone using an image of Superman originally painted by comic book icon Alex Ross. 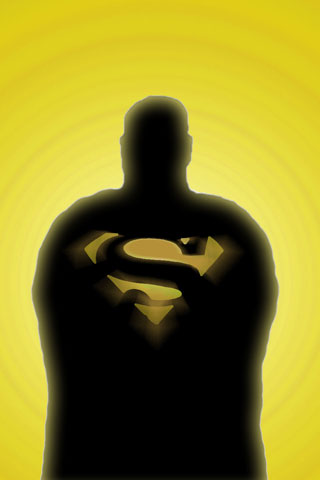 and the first of three home screens (more to come):

In case anyone is curious, we have original Superman, behind him we have the Player 2 version of him from the old school “bash n smash” arcade game, the white S belongs to a version based on the Justice Lords version from the Justice League animated series.  Back row, we have Bizarro, and the outfit Superman wore when he came back from the dead.

After reading all that, I realize how geeked up it all sounds.  Wow.

So I have recently begun my newest sci-fi TV show project.  A full viewing, beginning to end, of the 2004 Battlestar Galactica series which I have never seen before.  In honor of this undertaking, I designed a new lock screen and home screen pairing for my iPhone.  First we have the lock screen;

For the home screen, I wanted to start with a logo.  I found the one I liked the best on Deviantart from a user named cyberdrone2000.  I’ve been trying for twenty minutes to post his image, but I can’t make it work.  Instead, PLEASE view his image in his Deviantart gallery here!

From the logo image he made, I did some photoshop work on it, and came up with:

I’m really pleased with how this came out, and hope you all enjoy it too.  Once again, check out cyberdrone2000 at Deviantart.com and look at his gallery.

The first thing I did when I purchased my iPhone last year was, obviously, “slide to unlock.”  That was when I saw a great opportunity to add some geeky customization to the lock screen and home screen.  Would others be able to see it?  Only when I hold my phone out to them and say “hey, check out this cool thing I did.  No, I don’t have a girlfriend.  Why do you ask?”

Here are a few of the lock/home screen pairs I made up.  Next post will show some more, all made when I was watching all three Stargate television series in order.  Why do you keep asking if I have a girlfriend or not?

Inspired by the podcast Top 5, available through Major Spoilers (find links on the right) I decided to make a poster showing what Star Wars should have looked like if it were made a few decades earlier.

StumbleUpon brought me to this particular image.  As a big fan of Batman, I can only say that I love this image.  The image was created by Benjamin Andrew Moore.  His web info is listed below, and I highly recommend visiting his site!  He creates the kind of work that makes me wish I was better at what I do.

I love Star Trek.  This is proven by the fact that instead of doing my taxes like I had planned to do, I ended up making this just to test out my new printer.