I was barely a young man when I met my first real love.  She was a wounded romantic, and I was young and on fire.  We walked through an empty playground and I told her I loved her, because I did.  I reached inside and withdrew my fiery heart, the brightest and most trusting of all my hearts.  I gave it to her because I knew she would always care for it.  In time, her scars spoke lies to her, and she believed them.  She poured water upon my fiery heart, and the charred remains dried up and blew away.

My burns were still swathed in bandages when I met my second real love.  She was confident beyond the clouds, and I was stone-like with wariness.  We kissed beneath winter icicles and I told her I loved her, because I did.  I reached inside and withdrew my stone heart, the stoutest and most cautious of all my hearts.  I gave it to her because I knew she would always care for it.  In time, she deemed married life a vexation, and divorce a rite of passage to true Womanhood.  She squeezed blood from my stone heart, and the dust left behind scattered and blew away.

The cracks had just healed when I met my third real love.  She was purposely distant, and I was redesigning myself.  We stood under a shower of autumn leaves and I told her I loved her, because I did.  I reached inside and withdrew my paper heart, the intricately folded and most expressive of all my hearts.  I gave it to her because I knew she would always care for it.  In time, she found the expressiveness tiresome, called it abrasive.  She tossed my paper heart upon the fire, and the embers floated up and blew away.

My eyes were newly dry when I met my fourth real love.  She was manically pixie-like, and I was hopeful yet fragile.  We each crossed the skies to be briefly near each other, and I told her I loved her, because I did.  I reached inside and withdrew my glass heart, the wide-eyed and most delicate of all my hearts.  I gave it to her because I knew she would always care for it.  In time, she came to fear the hopeful closeness, and pushed my glass heart away.  It shattered to sand upon the floor, and the sand caught the wind of my sighs and blew away.

I cannot know what, or who, I will be when I meet my true, real love.  She will be everything I have sought, and I will be frightened, yet willing.  We will fill the spaces of each others’ souls, and I will tell her I love her, because I will.  I will reach inside…and find that all my hearts are gone, save the one true heart that makes me myself.  She will reach inside and withdraw half of her heart, and say “I will share my one true heart with you, because I know you will always care for it.”  I will reach inside and withdraw half of my heart.  I will give it to her because I know she will always care for it.  In time, my heart will be one with hers, and hers with mine.  That is when I will know that I have found…

He sees all his friends, old acquaintances, even his family, navigating life like masterful downhill skiers.  Slicing between flags at blinding speeds, looking as calm as they would were they walking the grocery aisle.  But then he looks to himself and sees a one-armed man trying to juggle for the first time.  With axes.  Blindfolded.  And upside-down.  Nothing comes easily except gaining weight and procrastinating.  He doesn’t know why he can’t right himself on this river of existence.  But at the same time, he does.  Admitting to himself that he is lazy and unmotivated is not the hard part.  It is sadly easy.  What is difficult for him is fighting that truth.  It is easier to stagnate and be mad at the universe than it is to stand up and cut your way through the jungle between yourself and your ideal. But there is always something missing.

If he had a better job he would be happy enough to make changes.

If his job had a better schedule he could be more creatively productive.

If he had a girlfriend he would be confident enough to take the steps needed to grow.

If he had more money he could work less and use that time to work out.

If he had higher self-esteem he could maintain a relationship.

If he wasn’t this, he could be that.

If he was here, he could go there.

If one, then the other.

If up, then down.

If future, then present.

If he had motivation, he could write.  So he stood up, took a step, and he wrote this.

I should start by saying that I don’t get freaked out by all Christians.  Only some of them.  The ones who evangelize to strangers like a rabid car salesman.  The ones who think gay people will destroy the world with their ridiculous notions of “love” and “equality” and other such nonsense.  The ones who said the country was doomed because the President was a Muslim, even though he isn’t.

When I saw this news story, I decided I had to make this the first current events topic I would write about on this blog.  It’s got it all!  The courts doing good things, a teenager standing up for her beliefs, and yes…the crazy crazy crazy ones I just mentioned.  For a full article on this subject you can CLICK HERE to visit the Washington Post article.  To sum up, a 16-year old girl named Jessica objected to a prayer that was hung on the wall of her school auditorium.  Some people in her situation might just let it be.  The prayer doesn’t come off the wall and wrestle you into believing in God.  But still it bothered her, and frankly it’s her right to be bothered by religious representation in her public school.  She brought legal action into the mix to have the prayer removed or covered, and a judge ruled that the law was on her side with this, so the prayer has now been covered by a tarp.

Simple, yes?  Christian students who like the prayer can write it in their notebooks and carry it with them all day instead of looking at it on the auditorium wall, advocates for keeping religion out of public school can be glad for this small victory, and Jessica, an Atheist, is no longer faced with the daily feeling of that wall hanging telling her she doesn’t belong there.  Unfortunately, this is the point where the crazy crazy crazies come in.

Jessica has been receiving death threats from her fellow students.  You read that correctly.  Her follow students, Christians who theoretically believe in things like “love thy neighbor” and “peace be with you” are threatening to kill a 16-year old girl for exercising her legal rights and wishing to be comfortable in her own school while doing so in a way that does not demonize Christians in any way.  If anyone else thinks that sounds a little like a Jihad, you’re not alone.  These children, the ones who think God is best served by having an Atheist slaughtered for making sense, are the ones that freak me out.  Why?  See for yourself; 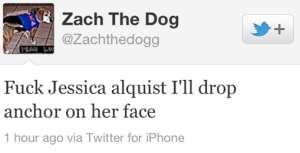 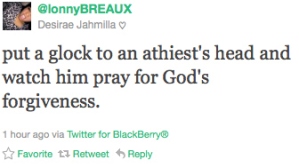 That last one may just look like a guy laughing at Jessica’s misfortune, but after looking into his twitter account a little you’ll find him suggesting that Casey Anthony should adopt Jessica, and on Martin Luther King Jr. Day he posted that MLK’s dream was to be white, and wished everyone a Happy James Earl Ray Day.  So yes, not only is he religiously intolerant, he’s also a racist.  And a bad person.  A bad, bad person.

If you’re not freaked out too, I would have to ask why.  This girl has to be taken to school by a police escort for safety.  Anchor dropping, burning in hell, and an Atheist holocaust; sounds more like tough love than God’s love, if by tough you mean psychotic and homicidal.  Why does it end up this way?  Are these kids being taught to hate Atheists when they go to church?  Taught to hate ALL non-Christians?  Or are they all coming to this interpretation on their own after hearing the weekly sermons?  Do they even GO to church?  I attended church every week for many years in my late teens and early 20’s.  Not pressured or forced by family.  I went of my own accord because I needed something to relieve some depression I was going through at the time.  I don’t remember anyone preaching about killing Atheists.  Or killing anyone.  So let’s assume, and hope really hard, that churches are not instructing children to go threaten Atheists with death.  Where else are they getting the idea?  Home?  Maybe their parents are the ones who want the Atheists wiped out and are passing that desire on to their kids.  But what are the chances that this many kids are going to have parents in favor of a new round of Crusades?  Okay, we’ll cross that one off as well.  Sifting through the remaining possibilities and……hey, this one looks a little promising.  They don’t actually want her dead.  They just want the attention that comes to people who very publicly say they want someone dead.

Think about it; it’s a topic that is easy to jump on bandwagon style.  Plenty of people local and nationwide would get behind it because religious intolerance and Christian fanaticism is not exactly hard to find.  It makes them all look tough and devout and hardcore while not having to prove it because really, who is going to challenge them to prove their devotion by making an assassination attempt in school?  They don’t hate all non-Christians, because Jessica cannot be the only student in the school who doesn’t go to church.  There must be others, but the Death Tweeters don’t go after them because there is no media attention in it for them.  This is the part that people may not like reading, but it has to be said.  If any of these hateful students wanted Jessica dead, she’d probably already be dead.  I’ll use myself as an example here; If I was planning to kill someone for having beliefs different than mine, I would not be tweeting about it first.  “Nail her to a cross” is something you hear from a person who wants to sound dangerous but doesn’t have the necessary constitution to actually be dangerous.  They want to sling the hurtful barbs and scare Jessica, make some headlines, gain some scary reputation, without any of the pesky jail time that goes with following through on the things they’ve been saying.

My bottom-line opinion: I’m not freaked out by these kids anymore, because they are not the crazy crazy crazies.  I seriously worked this out while writing this post.  It ended up going in a direction different than I originally expected.  I’m still freaked out by the actual Christian fanatics, but these kids are certainly not them.  Well, maybe a few are.  But certainly not all of them.  Most of them are just attention whores who think death threats are cool.  But it’s okay, because I’m “sure” they have been saved by God’s grace.  Right?